"The PSE can analyse the events leading up to the atrial fibrillation via the data collected by the Lifetouch," Liz Swantack, Clinical Research Nurse, Ohio

Current hospital practice means patients need to remain in hospital post-surgery or go back regularly to hospital after they have been discharged to have their vital signs taken and analysed. Healthcare professionals can lose valuable insight into a patient's condition once they leave hospital and patients can often feel neglected - they believe that being out of sight means out of mind. However this doesn't have to be the case.

Mike Wilson underwent open heart surgery last year. The operation was a success and Mike was quickly moved to the cardiovascular step-down unit from the cardiovascular ICU after just two nights. He was recovering well but whilst in the step-down unit he suffered from post-operative atrial fibrillation. His heart rate escalated, his temperature soared and there was a concern around the risk of sepsis.

Mike's wife Liz, an RN experienced in cardiac recovery and intensive care nursing, was aware of the Patient Status Engine and Lifetouch cardiac sensor and knew if Mike had been monitored with the PSE in hospital the doctors and nurses would have been able to analyse the chain of events leading up to the atrial fibrillation via the data collected by the Lifetouch.

"We missed the opportunity being that he was tethered to a simple three lead ECG monitor without the smarthealth capabilities of the PSE," said Liz.

Mike was put on an antiarrythmic IV drip and his heart rythmn reverted to normal. He was discharged the following day on beta-blockers and antiarrythmic medication but now being monitored with the PSE.

"Wearing the Lifetouch made me feel like I was being taken care of despite not being in hospital," said Mike. "I knew I could view my ECG anytime and that my heart rate was being monitored continuously." 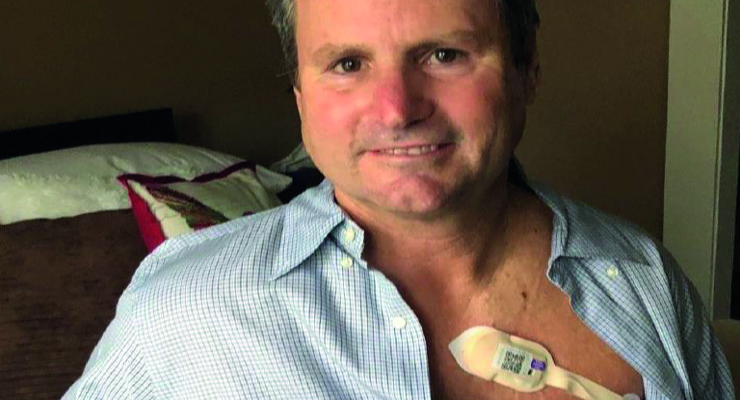 Learnings and Expected Outcomes From Home Use of the PSE:

Earlier and faster recovery of patients
Through wireless freedom, isolation from HAI's, and higher levels of comfort and reassurance

Let us help you find what you’re looking for…